What can I plant, when?

A couple of my friends have been asking what they should be planting and when…I am sure they are not alone in wanting garden scheduling advice.

An easy way to start is to use the following guide to divide up your seed packets according to planting times and whether they will be direct sown or grown as transplants.  Although using a calendar is the easiest method to decide when to plant, soil temperature is actually a better guide to determine the best planting time. 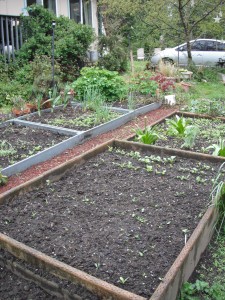 Early Spring:  (soil temperature 40-45° F) Plants that prefer colder temperatures can be planted in early March, (maybe even late February).  Peas do not do well in hot weather so it is important to get them planted as early as possible.   Radishes, lettuce, and spinach can be sown in successive plantings to extend harvest times until the weather gets too warm.  They can be sown again in late summer or fall.  Perennials such as asparagus, rhubarb, and strawberries can be planted as soon as they are available in nurseries.

Early Transplants: Some plants are better sown indoors and moved out to the garden later for better success and to extend the growing season for those crops that benefit from a longer period of warmth.  Most can be started in early to mid-March, but artichoke is better sown earlier in the year.  Cole crops such as broccoli, cauliflower, cabbage, kale, kohlrabi, and Brussels sprouts, prefer cooler temperatures and are best started in a cool greenhouse or a cold frame.  Some herbs, such as parsley, can also be started early.  I start my tomatoes and peppers in my warm house and transfer them to my greenhouse once they have germinated.  If kept in the house, make sure they get plenty of light! 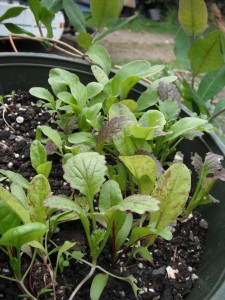 I like to grow salad greens or “Mesclun” mixes in a pot. It is easy to snip a few leaves to add to a sandwich!

If you haven’t started any transplants, you can buy starts at a nursery.  The advantage of buying seeds and growing your own is that you can grow different varieties—I especially like seed mixes: my favorites include a hot pepper mix, a broccoli mix, and a lettuce or “mesclun, “(salad greens) mix.  The disadvantage is that you end up with more plants than you can use.  I often give extras to friends.  You may even be able to plan with a friend and decide to grow certain plants to share with each other!

Mid-Spring: (soil temperature 45-55° F) Early April is a good time to sow many root crops such as carrots, beets, turnips and parsnips.  You can also direct-sow the cole crops. Plant seed potatoes in a raised bed with new soil to avoid wireworm infestation.  Onion starts should also be available at feed stores and nurseries.

Late Transplants: I like to give my cucumbers, pumpkins and squashes (including zucchini) a head start by starting them in mid-April.  Basil can be sown at this time too.

The “average last killing frost” for the Puget Sound region is between April  1st – 15th.  This is when it is considered safe to plant most transplants outside.   But you may want to wait until the weather is warmer for your tomatoes, peppers and basil.

Late Spring: (soil temperature > 60° F) Corn, beans, gourds, and sunflowers need warm temperatures to germinate.  A soil thermometer can help you to decide whether you can plant earlier than mid-May.  If you didn’t start squashes earlier, you can also direct-sow them at this time.

For a more comprehensive guide, Seattle Tilth’s “The Maritime Northwest Garden Guide,” tells you month by month what can be planted outside, in a cold frame or inside, including flowers and herbs!

(This article was first published in the Peninsula Gateway on April 14, 2010)