Stumpery! –A new word for me, even though it has been around a century & a half! A stumpery is similar to a rockery but is made from whole stumps, logs, and pieces of bark.  Plants, such as ferns, mosses and lichens, are artistically arranged to grow around or on them. The first stumpery was built in 1856 at Biddulph Grange in Victorian Britain.

I learned about stumperies and the Victorian Stumpery recently constructed at the Rhododendron Species Foundation when I went to a lecture by John van den Meerendonk, the President of the Hardy Fern Foundation, hosted by the Bayshore Garden Club at the Key Center Library. 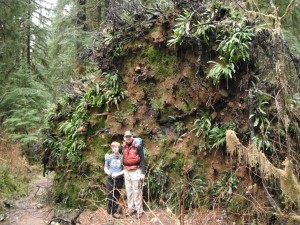 Ferns grow nicely on the upturned roots of a fallen tree.

A Stumpery seems an ideal design concept to incorporate in a Pacific Northwest woodland garden. If you are a hiker, like me, you can envision how this art can imitate nature. Stumps, fallen trees and their upturned roots create many more nooks & crannies and surfaces to be populated by botanical treasures.

Ferns are like flowering plants in that they have true leaves and a vascular system to transport water and nutrients.  But they do not produce seeds.  Instead, they have a complex life cycle consisting of two alternate generations.  The diploid sporophyte generation is the one we recognize as a fern.  Ferns produce spores on the undersides of their fronds, which after they are released and fall to an amenable substrate, will grow into moss-like plants called prothallia.  These haploid gametophytes are free-living organisms.  They in turn produce gametes (sperm and eggs).  A mobile, flagellate sperm seeks out an egg to fertilize.  The presence of water during this stage is critical and is why most ferns need to live in a moist climate, such as our rainforests.  Once an egg is fertilized, it will grow into what we recognize as a fern.

We have several native ferns that could be used in a stumpery or woodland garden. Although some people eat the fiddleheads or rhizomes of some ferns, (sometimes considered a “famine food” by natives) most should probably be avoided due to possible presence of carcinogens or other toxins. Many ferns are, however, often browsed by deer, elk, bear and Mountain Beaver. 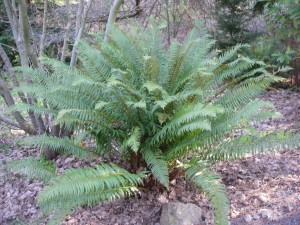 Western Sword Fern, Polystichum munitum    Western Sword Fern is the most widespread and versatile of all our native ferns.  Although at home in woodlands, it often adapts to drier, sunnier sites in landscapes.  Its tall arching fronds are most impressive planted in drifts in a woodland garden. Fronds partially unroll their “fiddleheads” by late May. The fronds were used frequently for lining baking pits and storage baskets; and were spread on drying racks to prevent berries from sticking.  They were variously used for placemats, floor coverings, bedding; and for games, dancing skirts and other decorations.  They are frequently used today in flower arrangements. Anderson’s Holly Fern, P. andersonii, and Braun’s Holly Fern, P. braunii, are similar species in the same genus. 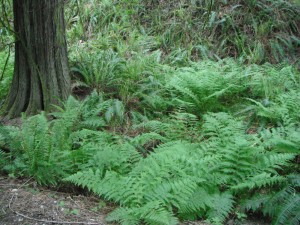 Lady Fern,  Athyrium felix-femina   This species, with its graceful, lacy, bright, yellow-green fronds, is very eye-catching.  It may, however be a little too aggressive for a formal garden, but is ideal for a wild, moist, woodland garden, where it can freely multiply.  It dies back completely in winter. 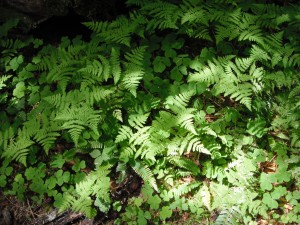 Ostrich Fern, Matteuccia struthiopteris, is found throughout much of the northeast and across Canada; but only reaches the west coast in southern Alaska and British Columbia. Sterile, bright-green deciduous fronds grow to nearly 6 feet, in vase-like clusters, in moist, moderate climates. 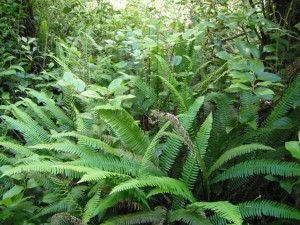 Deer Fern, Blechnum spicant,  Deer fern has two types of fronds: narrow, evergreen, sterile leaves spreading outward, and even narrower, taller, fertile fronds, which grow erect, from the center. Hitchcock writes: Deer Fern “is a truly choice fern usable in many places in the garden, but so common as to have little appeal to most gardeners.”  That said, it is one of the best native ferns for landscapes, second only to Sword Fern.  Although at home in a woodland garden, it can adapt to many situations, given adequate shade and/or moisture.  Deer Fern has also been used as a houseplant.

Giant Chain Fern, Woodwardia fimbriata Giant Chain Fern has been found on Vancouver Island in British Columbia, and in the Puget Sound region of Washington where it is listed as sensitive.  About Woodwardia fimbriata, Hitchcock writes: “This is surely our choicest large fern.”  Being the largest, it is certainly the most impressive of all our ferns, it performs best in a woodland garden especially next to streams, bogs, springs or ponds, but it can also grow in full sun with adequate summer moisture.  It can be very striking as a focal point or when planted against a wall in a shady location.  It readily produces “sporeling plants” in wet areas.  It also may be propagated in the spring by division of the rhizomes–but judicious collection of spores is preferable where this species is rare. 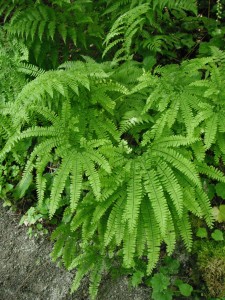 Western Maidenhair Fern, Adiantum aleuticum   Maidenhair Ferns are prized by gardeners for their delicate, airy fronds. Western Maidenhair is sure to evoke memories for avid hikers of enchanting waterfalls, where it grows on cliffs within reach of water spray.  Gardeners should make sure this charmer gets planted in a shady place with plenty of moisture.  Natives used the black stems of Maidenhair Fern in basketry designs.

Maidenhair Spleenwort, Asplenium trichomanes    Kruckeberg writes: “It is one of our best rock garden ferns, and a superb container plant;” Hitchcock writes: “Both our plants (aspleniums) are attractive, but A. trichomanes is much nicer and the more tractable.”  It can be grown in wall crevices. 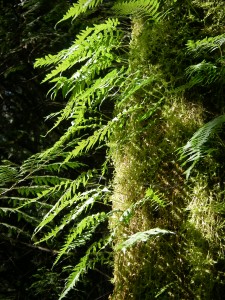 A related species, Leathery Polypody, Polypodium scouleri,  Grows in tree trunks and exposed cliffs and banks often within reach of salt spray. Hitchcock writes “…is by far the most attractive species, and of course the most difficult to grow successfully.” 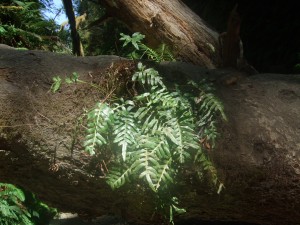 Red Huckleberry, Vaccinium parvifolium would also be ideal in a stumpery, because it is often found growing on stumps and nurse logs in the forest! Be creative! You could even turn your stumpery into a Fairy Garden!