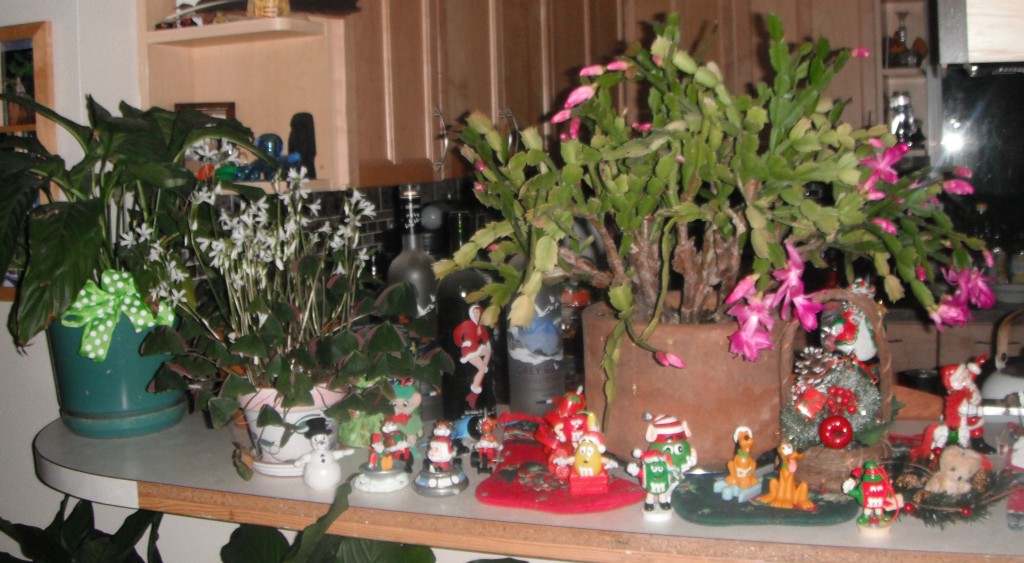 A Christmas Cactus I have had for many years. To the left with the white flowers is an Oxalis, I received one year as “Shamrocks” on St. Patrick’s Day.

Most potted plants sold in the florist industry seem to be destined for a short moment of glory before ending up in the compost pile. Plants such as Persian Violet, Exacum; Pocket book Plant, Calceolaria; Cineraria, Senecio sp.; and Ornamental Peppers are usually short-lived and best treated as annuals. Some flowering plants, however, can be kept alive and may bloom again if you know how to care for them. Many of these plants are forced to bloom for a particular holiday even though their natural bloom time may be in an entirely different season.

Poinsettias can make an attractive houseplant throughout the year if kept in a bright place. To force back into bloom, they need at least 12 hours of complete darkness each night beginning in early October–even a small amount of red light will interrupt flower initiation. At the Point Defiance Greenhouses we were able to grow poinsettias without shading because there was no light pollution to interrupt the natural night period. Flowering Kalanchoe, similarly, needs 3-6 weeks of at least 14 hours of darkness.

Christmas and Thanksgiving Cacti also benefit from 12 to 14 hours of darkness at night but are not as sensitive to light pollution. They do best when given cool night temperatures. I bring mine in from the greenhouse every year when it flowers. 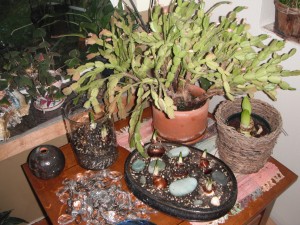 I plant out forced bulbs later in the garden. I keep amaryllis in my greenhouse after they finish blooming.

Many bulb species such as Tulip, Narcissus, Lily, Crocus, Hyacinth, and Iris can simply be planted outside later. You should keep them watered in a bright spot after the flowers have withered until the weather is mild enough to replant outside. Paper-Whites are not as hardy as other Narcissus but are zoned for the Puget Sound region. Although many flowering bulbs may eventually fade away, some, like Daffodils & Easter Lilies, consistently bloom every year in my garden.

Giant Amaryllis, Hippeastrum sp., bears spectacular, large flowers. Just as for other bulbs, keep watering until leaves begin to fade; then let the plant dry out for a while. I bring mine back inside from the greenhouse whenever I see a new flower bud developing.

Azaleas need to go through a seasonal temperature regime –warm for flower bud initiation –a cold dormancy period–a warm “spring” to bloom again. Two main hybrid groups of Azaleas are used for flower forcing. Non-hardy Southern Indica varieties must be kept in a cool greenhouse over winter. Kurume Hybrids may be planted outside in our area.  It may be worth a try to plant your azalea outside, but be prepared if it does not survive.

Cyclamens like cooler temperatures and often wither quickly in a warm house. They are best given bright light in a cool room. Tubers go dormant in hot weather and may later grow and bloom again after several leaves have developed. Oxalis species, grown as shamrocks also benefit from a rest period.

I predict that most of the expensive Orchids I see people purchase are doomed. Beginners may have some success with Cymbidium, Phalaenopsis, Oncidium or Paphiopedilum species.

Hardy species of Primroses, Primula can be planted outside; non-hardy species, P. malacoides, P. obconica, & P. sinensus are best treated as annuals. Miniature Roses need to be kept on a bright windowsill or planted outside.

Chrysanthemums come in many flower forms and colors. There are thousands of cultivated varieties. It’s worth a try to plant them out in the garden; however, some varieties may bloom too late for our climate.