Archive for Choosing a Christmas Tree 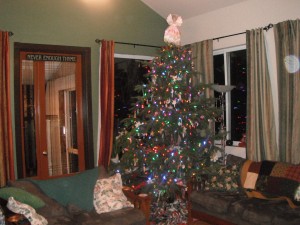 One of my favorite Christmas tree stories is from when I worked at the Seymour Botanical Conservatory in Tacoma.  A young, urban minister from one of the nearby churches came in around March to ask why his tree was dying.  After Christmas he had put it on his balcony and had been faithfully watering it.  Seeking more information, I asked him whether it was balled-and-burlapped or in a pot.  I had to stifle a guffaw when he told me it was in its stand!  The cut tree he had been nurturing for three months was essentially dead.  To give him some credit, it may have lived if it had been a willow! 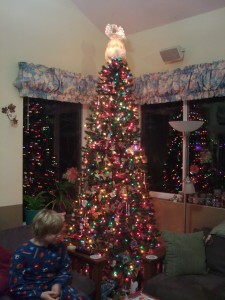 An artificial tree can be chosen that is just the right size & shape.

But today, which really is the “greenest” option, an artificial, cut, or living tree?  I admit to having owned an artificial tree (our son got over-eager one year and decided to put it up himself. He improperly, forcibly bent the branches down by mistake, basically ruining the tree for future use).  It was convenient, cheaper and was reused year after year.  (My husband would like to buy another, but I am resisting.) The problem is that artificial trees are not biodegradable and will eventually end up in a landfill.  Additionally, they are made of PVC plastic that may contain toxic chemicals. –Not what we want our children gathered ‘round.  Most are made in and shipped from China, adding to their carbon footprint. 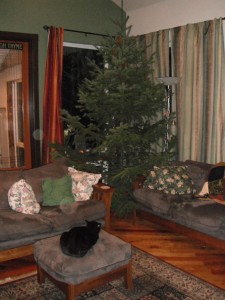 In contrast, cut trees are grown locally and can sequester a significant amount of carbon while they are growing–and they are renewable.  Some farms may use pesticides and chemical fertilizers. Perhaps you can find an organic tree farm; I have some I grew myself, but they are getting too big now, I may use the tops of the nonnative species sometime in the future. After the holidays, the tree can be recycled into mulch, returning to and improving the soil for other plants. 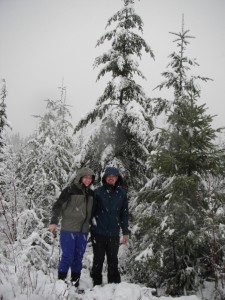 Picking out a Christmas Tree in Olympic National Forest

Another option for a family outing is to head to our National Forests and find a “natural” tree to thin from our timberlands.  By issuing permits, the Forest Service controls the species, location, the quantity, and size of trees collected.  Basic permits are $5.00 in the Olympic National Forest and $10.00 in Mt.Baker-Snoqualmie National Forest.  Contact a ranger station for more information.

If you bring a live tree inside, try to limit the time kept inside to less than a week.  Afterwards, keep it in a cool, well-lit area until outside temperatures are less frigid (in the 50’s)– do not allow the soil to dry out!  If it lives, it may become a treasured part of your landscape. 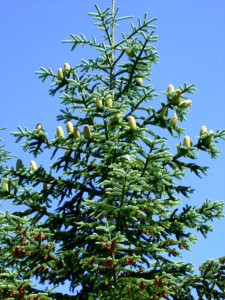 An older Noble Fir with cones

My favorite species is the Noble Fir.  It is open and ornaments hang from it nicely.  Grand Fir has long, dark-green, flat needles.  California’s White Fir is similar, but has a bluish color.  The popular, Fraser Fir, from the southern Appalachians, is nicely pyramidal. All firs have a lovely, balsamy smell.

Douglas Fir is so common here that many don’t appreciate it’s natural beauty.  It is often sheared to make a perfect pyramid, but an irregularly-shaped Douglas fir is often the “Charlie Brown” tree that is best loved! 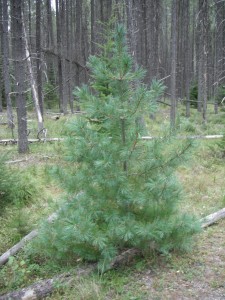 Those with allergies may prefer the less aromatic pines.  Western White Pine has soft, long needles with flexible branches. The more traditional Scotch Pine, with its stiffer branches and sharp needles can support heavier ornaments.

Surprisingly, our native Sitka Spruce is sometimes used as a large, civic Christmas tree in the British Isles.  Live Colorado Blue Spruce should be avoided in the northwest due insect pest problems.  All the spruces are very prickly!

As is appropriate, many other evergreen species of fir, pine, and spruce are used in other regions where they are native.  Even Eastern Red Cedar (a juniper) and the hybrid Leyland Cypress have graced holiday festivities.

Whatever you choose, have a “Green” Holiday and enjoy decorating your beautiful tree with your family!

Posted in Choosing a Christmas Tree