The reason a plant produces a showy flower, is to attract a pollinator.  If you are attracted to a flower, because of its beauty or its fragrance, it is sure to attract other creatures as well. 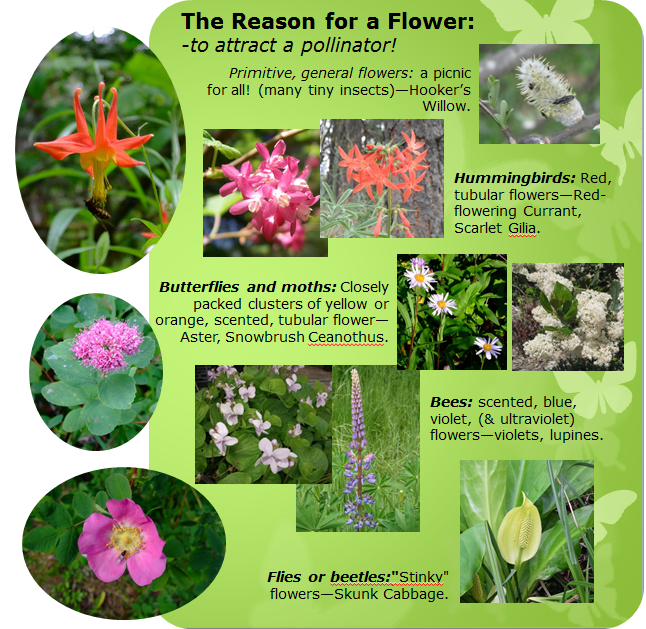 Botanists classify flowers as primitive or specialized.  A primitive flower like a Magnolia can be compared to a community event—everyone is invited to sample the fare.  More specialized flowers have evolved to attract just one particular species of pollinator, that in turn have evolved to be better able to access the nectar or pollen of that flower.  A classic example of this type of coevolution is when Darwin was ridiculed for predicting that there must exist a moth with a 12-inch long tongue to pollinate an orchid that had a 12-inch long nectary.  Over 40 years later that moth was finally discovered in Madagascar where the orchid had originally been collected.   This degree of specialization, however, can ultimately lead to extinction of both species when either of the species is threatened.

Instead of lists to help you choose flowers to attract wildlife, it is more helpful to know what type of flower attracts what type of pollinator.  The following are “preferences.”  Many different pollinators are likely to visit white flowers or more primitive flowers.

Hummingbirds prefer red, orange or pink, tubular flowers.  Pollen is transferred when protruding stamens and stigmas brush up against the hovering hummingbird as it sips nectar from the flowers.  The color red is especially attractive to hummingbirds during migration.  I always put out my hummingbird feeders when Red-flowering Currants begin blooming in early spring.  Hummingbirds seek out the brightly colored flowers on their return journey from wintering in southern regions such as Mexico.  Some hummingbirds may stay year-round if the food supply is sufficient.  See my handout: Native Flowers for Attracting Hummingbirds.

Butterflies and moths prefer yellow or orange, scented, tubular flowers.  They need a landing platform and prefer closely packed clusters of flowers so that they can rest while lapping nectar from several flowers at one stop.  They especially like composites such as asters, daisies and sunflowers that have several florets in one “flower.” See my handout: Native Flowers for Butterflies.

Bees prefer scented blue and violet flowers.  Some flowers such as pansies and violets have ultraviolet “landing pads” that guide bees in the same way as lights on an airstrip guides airplanes.  Fruit growers often provide “nest boxes” for native Orchard Mason Bees.  These “busy bees,” are smaller than honey bees and are very good at pollinating apples, plums and many other horticultural crops.

Flies or beetles usually pollinate “Stinky” flowers, such as Skunk Cabbage.   Bat flowers, such as the Saguaro Cactus, are white or cream-colored, fruity-smelling, large and dish-shaped.  In South Africa and Australia rodents pollinate flowers such as Proteas.

Other insect species also pollinate flowers, but I’ll leave the identification of most to an entomologist.  Flowers provide a convenient food for many insects; that in turn may become food for birds and other animals. The seeds and fruits that develop after pollination are also important foods for animals and people. –So grow and nurture the flowers that make you happy, and you are sure to make some of the local wildlife happy too!