Warning: Declaration of AMW_Related_Sub_Items_Walker::walk($elements, $max_depth) should be compatible with Walker::walk($elements, $max_depth, ...$args) in /home/habita16/public_html/wp-content/plugins/advanced-menu-widget/class-advanced-menu-walker.php on line 332
 Why do Evergreens predominate in the Coastal Pacific Northwest? | Habitat Horticulture PNW

Why do Evergreens predominate in the Coastal Pacific Northwest? 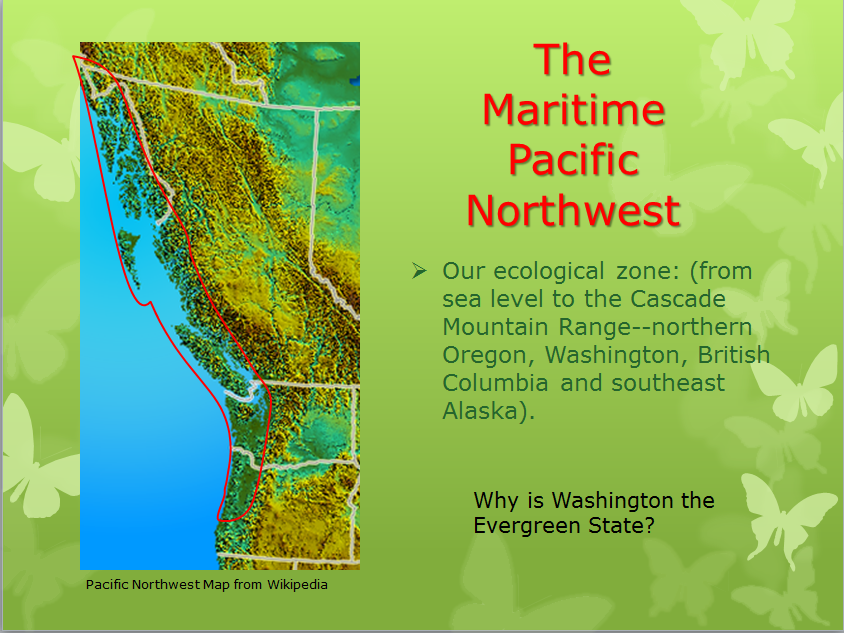 Climate plays a major role in determining what plants can be found naturally or can survive in any location.  As children we learn that there are different types of habitats found throughout the world: deserts, grasslands, and various kinds of forests.  I used to wonder why conifers dominate our forests here in the Pacific Northwest.  In other areas of similar latitude– the eastern United States, Europe and Asia–deciduous forests predominate.  Evergreen coniferous forests are usually found at more northerly latitudes.

Most people believe that it rains in Seattle and the Pacific Northwest year-round, although it does rain much of the year, our great secret is that it is usually dry and sunny (but not too hot) in July and August.  The weather patterns in the Pacific Northwest are influenced by its proximity to the Pacific Ocean.  Our maritime climate is characterized by relatively warm, wet winters and relatively cool, dry summers.  In the winter, warm, moist air from the southwest flows into the area, as the air cools, the moisture precipitates as rain (or snow if it gets cold enough).  In contrast, cool, dry air coming from the northwest, delivers little rain in summer. 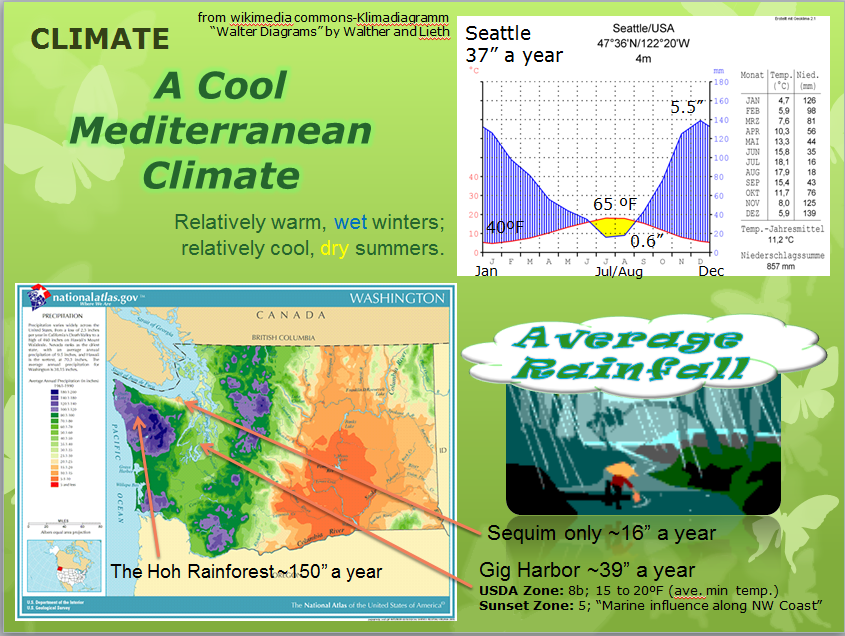 Dry summers can cause severe plant stress.  Newly planted landscapes are especially vulnerable.  It is a common sight to see dead plants in new landscapes that were not irrigated sufficiently.  If you plant in July and August, it is important that the new plants are watered adequately but not overwatered!  Any plants that were grown in a greenhouse or shadier locations will need to be “hardened off” before planting.  This is done by exposing them incrementally to outdoor temperatures and increasing light levels a few weeks before planting.  “Sun leaves” need to grow to replace”shade leaves,” which will burn in the hot sun.

Evergreen plants are able to grow whenever there is adequate water and favorable temperatures.  If it is too dry they close the small pores, stomates, on their leaves that allow gas exchange, halting photosynthesis.   Evergreen leaves are waxy and often small to minimize moisture loss through epidermal surfaces.  Dormancy can occur when it is either too cold or too dry.

Evergreen Huckleberry (Vaccinium ovatum) and Salal (Gaultheria shallon) are the dominate undergrowth shrubs in our second-growth lowland conifer forests.  They are both outstanding plants for the landscape that are adapted to our dry summers; with beautiful evergreen leaves prized by the florist industry and berries prized by people and wildlife.

In some parts of the world, such as Madagascar and Costa Rica, there are summer deciduous forests, where shrubs and trees lose their leaves in the summer! Our deciduous trees and shrubs prefer moister areas near streams and rivers.  If summer has been too dry, they too will start turning color early and start shedding leaves before fall has even arrived.

The end of summer or beginning of fall is a good time to start planning new landscapes, so that you are ready to start planting as soon as there is regular rainfall. Trees and shrubs planted in fall and winter have a better chance of survival because they are able to grow roots into surrounding soil using stored food reserves.  But remember, even natives may need supplemental irrigation the first couple of summers!

(This article was first published in the Peninsula Gateway on September 8, 2010 as “Dry summers are expected in the evergreen state.”)