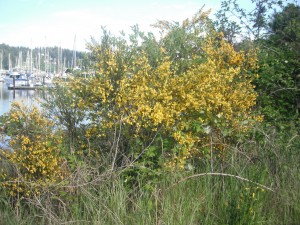 Scotch Broom was originally introduced as an ornamental and for erosion control.

Invasive plants are non-native plants that negatively impact the natural ecology of an area by outcompeting native plants.  Their presence affects the entire food web by depriving insects and other animals of food, cover and nesting sites normally provided by displaced native plants.  Invasive plants may also adversely affect agriculture and other businesses important to our economy; as well as mar the beauty of our parks and natural areas.

People are the main dispersers of plants; plants are often introduced unknowingly as unnoticed seeds on shoes, clothing or baggage.  Many are introduced purposefully for use as food, culinary or medicinal herbs, construction materials, or garden ornamentals. 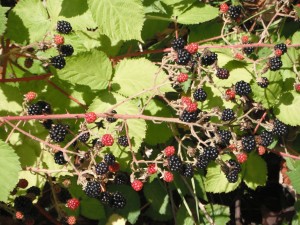 Himalayan Blackberry, Rubus armeniacus, was introduced for its delicious berries.

The first line of defense against invasive species is education and prevention.  The USDA, Animal and Plant Health Inspection Service (APHIS) conducts inspections at marine ports, border crossings and airports to prevent the introduction of pests, (insects, plant diseases, weeds, etc.), but it is not easily predictable which intentionally introduced plants will become a problem.

Early detection, monitoring, and control are essential to prevent spread.  Avoiding reintroduction is also important by prohibiting the sale of known invasives and educating eager gardeners to refrain from buying those plant species.  Butterflybush, Clary Sage, Fennel, and Baby’s Breath are examples of noxious weeds that are often still available to purchase.  Many wildflower seed blends also include noxious weeds. 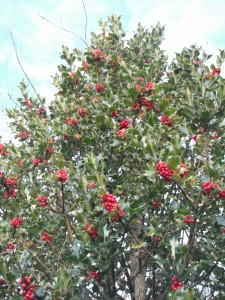 There are two basic types of invasive plants of concern to landscape gardeners:  Plants that invade disturbed habitats and plants that invade forests.  Common in disturbed habitats are Himalayan and Evergreen Blackberry, Scotch Broom, Gorst, and Japanese Knotweed.  In forests, the worst offenders are “the 3 Englishes:” English Ivy, English Holly, and English Laurel—after eating the fruit of these species, birds often transport and deposit the seeds in otherwise pristine wilderness areas!

Manual or mechanical removal (pulling, cutting or mowing), although hard work, is the best method of control.  Not long ago I noticed a hillside of blackberries that had obviously been sprayed with an herbicide—this hillside was right across the street from an estuary—I cringed to think of how much of the herbicide ended up in Puget Sound!

Blackberries can be mowed with a brush cutter or you can hire some goats to eat them (goats bred for meat are best; they may, however, eat your favorite garden plants and the bark off of desirable trees!)  Japanese Knotweed can be mowed as well—the roots need to be grubbed out for both species, or cover the area with a sturdy landscape cloth to suppress regrowth.  Either way, to quote Madeye Moody: “constant vigilance” is needed to totally eradicate them!

I go on “yellow flower patrol” every spring to cut out Scotch Broom.  Plants devote a lot of energy into flowering and fruiting—this is the best time for cutting them– before they go to seed!  They are also easiest to see when they are in full bloom. If neatness is not a worry, it is best to just leave the cut plant on top of the stubs to suppress new growth.  To discourage recolonization of a cleared area by seedlings, amend the soil with biosolids and replant with native shrubs and grasses.

Some people paint the cut stubs of these woody species with an herbicide to prevent resprouting.

For English Ivy, dig out as much as you can.  At the very least, cut the vines that are climbing trees.  By keeping it close to the ground, you can prevent it from maturing and producing fruit.

Check out the complete list of noxious weeds at the Washington State Noxious Weed Control Board    –and then “rally the troops” to eradicate the invaders!