Common Camas, Camassia quamash, grows in wet prairies that dry out in the summer.

Unlike people most plants are unable to move when drought, cold or other dangers threaten their survival. However, many plants have evolved strategies to help them survive through difficult times: They go dormant. Just like a hibernating animal, they store up food prior to withdrawing underground and going to “sleep.”

Not all underground structures are roots; many are modified from stem tissue. The purpose for most is either food storage, or to help the plant spread more quickly to surrounding areas.

The bulb is the most well-known underground structure. It is a short stem with thickened fleshy leaves. A bulb can be layered as an onion or scaly like a lily bulb. Most bulbs are monocots in the onion, lily (which includes tulips & hyacinths), amaryllis (which includes daffodils), and iris families. Camas bulbs were an important food for native people, but they also have attractive blue or white flowers. They grow in vernal wet meadows that dry up in the summer. Other attractive natives with bulbs include Nodding Onion, Chocolate Lily and Tiger Lily.

A corm is a short, vertical underground stem with thin, papery leaves. Plants with corms include crocus, and gladiolus. Native flowers that have corms are Fawn, Avalanche, and Glacier Lilies. Just as for bulbs, corms may help a plant survive a dry summer or a long winter. It’s especially useful for alpine flowers that only have a couple months to grow and bloom when they are not blanketed with several feet of snow. 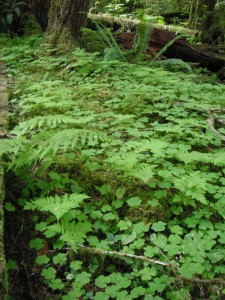 A rhizome is a creeping, horizontal stem. Rhizomes help a plant spread more quickly to surrounding areas. It may also store extra food. Plants with rhizomes include ginger, canna, orchids, some irises, some grasses and many ferns.  Plants with rhizomes, such as bamboo, can be very aggressive.  Rhizomatic grasses are some of the most troublesome weeds. Rhizomes can help a plant survive many aboveground disasters, such as forest fires. Desirable plants with rhizomes are often easy to propagate by division. Native species that have rhizomes include Cattails, Solomon’s Seal, False-lily-of-the-valley, Vanilla Leaf, Inside-out Flower, Pacific Bleeding Heart, Redwood Sorrel, Wild Ginger, Bunchberry, and many ferns. Trilliums also have short fleshy rhizomes.

A tuber is an underground stem or rhizome modified for food storage, bearing nodes and buds or “eyes.” The most famous is the potato. The potato was native to Peru and Chile but quickly spread to become a staple crop throughout much of the world. The Potato Blight is a fungus disease that caused the infamous Irish Potato Famine in the late 1840’s. The edible tubers of Oca, a type of oxalis, also native to the Andes, are gaining popularity. They are high in oxalic acid similar to Rhubarb. I bought some from Raintree Nursery, but have yet to taste them.  Cyclamen and tuberous begonias also have tubers. The tubers of Wapato, a native pond plant, were eaten by natives, either boiled or roasted.

A tuberous root is a thickened root that resembles a tuber. It serves the same purpose of food storage as a stem tuber, but is derived from root tissue. Sweet Potatoes and dahlias are examples.

The leaves of some flowering bulbs may sometimes become unsightly, but you should allow them to grow and manufacture food for next year. Most bulbs do best with little or no irrigation in the summer.

If you buy a new home, it is best to wait a year before you do any major landscaping; there may be botanical treasures hidden beneath the surface!

(This article was first published in the Peninsula Gateway on May 8, 2013 as “Underground structures key to plant growth.”)