What is your reaction when you see a creepy-crawly bug? Do you want to instantly kill it, or are you respectful of this other life form, maybe even fascinated by the appearance and behavior of the tiny creature? People tend to place other organisms in categories of good or bad either due to their effect on us or our things, or just because of some ingrained prejudice. Most “bugs,” in fact, cause us no harm, some are beneficial. 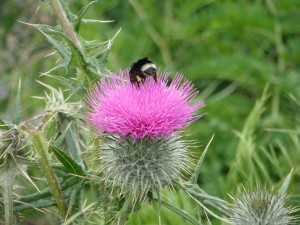 A bumblebee on a thistle flower.

Bees are the star pollinators. In addition to the introduced European Honeybee, there are about 4000 native bees in North America. Our native Mason Bees are well known as excellent pollinators of orchard crops. Bumblebees and many other bees are also important pollinators. 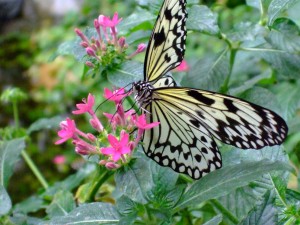 A butterfly from the Butterfly House at Pacific Science Center

Butterflies and moths are the showiest insects. They are attractive as they flutter from flower to flower or take a sip from a puddle. They pollinate flowers, but remember that you can’t have any butterflies if you kill all the caterpillars!

Syrphid or Hover Flies are good pollinators and they feed on aphids and other insects. Beetles and flies usually are the major pollinators of “stinky” flowers, such as Skunk Cabbage. It may take an entomologist to identify all of the tiny little insects that one may see gathering nectar and pollen from many different flowers! 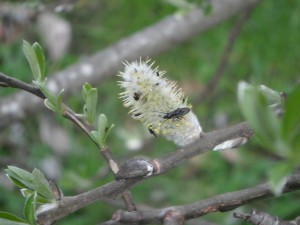 Many tiny insects pollinate flowers and are prey for songbirds.

A few wasps are pollinators, but most are more useful for pest control. Many small wasp species parasitize other insects, such as aphids and caterpillars. Yellowjackets are important predators & scavengers but are aggressive and will sting repeatedly in defense of their nests.

Spiders and Daddy-Long-Legs, or Harvestmen, are major predators of insects. Although many people hate spiders and will kill them on sight, I figure that they are probably helping to control more numerous insects. The only spider in our area that can give a nasty bite is the non-native Hobo Spider or Aggressive House Spider; it spins a funnel web and is often found in basements and outbuildings. Predatory Mites are spider relatives that prey on their cousins, the Spider Mites, which live on the undersides of leaves, sucking out plant juices.

Many ants may go about their business, causing us no concern. In the forest, Carpenter Ants fulfill an important role as major decomposers, but just like termites, they can cause major damage to wood structures. I always get Sugar Ants in my house at certain times of the year. A few “scouts” don’t bother me, but when they start nesting in my house, I will put out poison bait.

Many children are fascinated by Pillbugs or Roly-Polies. These are actually land crustaceans that can roll themselves entirely up into a ball. Other Woodlice, also known as Sow Bugs, Chiggy-wigs or Potato Bugs, may not be able to roll up entirely. They are also mostly decomposers, but may take a few bites out of your strawberries. 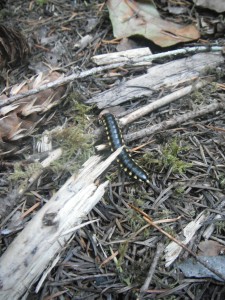 Millipedes, such as the Night Train Millipede are generally decomposers; centipedes prey on insects and other small creatures, killing them with a venomous bite.

Praying Mantis, Assassin Bugs, Lady Bugs, many beetles, Flower Flies, & Lacewings all help to control damaging pest species. Just make sure you don’t kill their larval forms—I have sometimes pleaded with homeowners not to spray the creepy-crawly Ladybug larvae they found in their fruit trees.

And don’t forget the lowly worm. It is a major decomposer and creates the lovely “vegetable mould” or compost that nourishes the garden.

“Bugs” are an important food source for many songbirds, amphibians, reptiles, and some small mammals. They play a vital role in the local ecology. Be careful when spraying pest species; try to garden organically!

(This article was first published in the Peninsula Gateway on April 17, 2013 as Don’t fear bugs in your garden, they could be helping.)