Autumn is harvest time.  If you are like most people you have had some successes and some failures.

Some fruits and vegetables such as apples, winter squashes, cabbages, potatoes, and many root crops will store well without any preparation; as long as only healthy, intact, and unblemished produce is stored.  These foods were traditionally stored in a root cellar dug into a hillside.  Some root crops can just be left in the ground with extra mulch to prevent freezing.  A proper root cellar needs darkness, cool temperatures (32-40° F), adequate ventilation, and high humidity, with no dripping condensation.  Some older houses even have built in cupboards that have ventilation to the outside for storing produce.

Drying is perhaps the oldest form of food preservation; fish, meat, fruits, vegetables, and herbs have been dried in the sun for thousands of years.  The traditional method is just to lay the food out on drying screens.  Daytime temperatures, however, should be 85-100°F or more, which is unlikely in our climate—except with specially designed solar dehydrators.  Homemade or commercial electric dehydrators give you much more control (especially in excluding insects and other pests).  Oven-drying is only possible if your oven can be set at lower temperatures (130-150° F).  Smoking is a better option for meats and fish, but requires a specially built barbecue or smokehouse.  Curing, the dehydration of food using salts, is usually done prior to smoking. 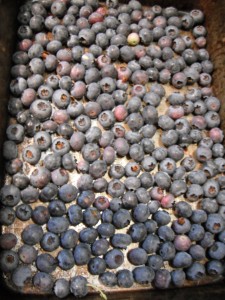 Blueberries, frozen on a tray prior to packaging.

Freezing was used in colder climates.  Modern freezers make this the easiest way to preserve your food.  It’s best to look up the best method for each crop.  Fruit can be frozen with or without sugar or syrup.  Berries can be frozen on trays to keep them separate and subsequently repackaged.  Most vegetables need to be blanched first.  Blanching involves dipping them in boiling water for a few minutes; this process slows enzyme action and preserves flavor, texture and nutritive value.  I’ve found that frozen vegetables that were not blanched end up tasting bitter.  Tomatoes, peppers and onions do not need to be blanched.

Fermentation uses microorganisms to convert starches and sugars to alcohol; barley into beer, fruits into wine, and cabbage into sauerkraut or kimchi. Wines, beers or ciders that have transformed into vinegar can then used to make pickles. Pickling involves soaking a food in acid (usually vinegar) to chemically transform it.  Spices are added to many pickling recipes to make chutneys, relishes, and other sauces.

Early cultures stored fruit in honey.  Although sugar had been known to Europeans since the time of the crusades, due to taxation and other trade barriers it was not widely available to common people until the end of the 19th century.   With sugar, you can preserve fruits by making jams and jellies.  For the best results, follow an appropriate recipe in a box of pectin. 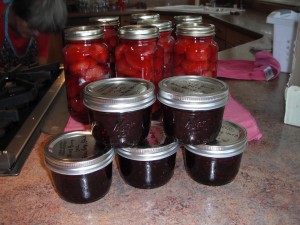 Canning is a process of heating foods in jars or cans to destroy microorganisms and inactivate enzymes, as the jars cool they create a vacuum seal that prevents recontamination.  This can be done with a large kettle or a pressure cooker.  Canning fruits, such as peaches and pears (and tomatoes), is safe and rewarding.  I have even made my own apple pie filling!  Low-acid foods such as meat or vegetables (excluding pickles) need to be processed with a steam pressure canner to prevent against botulism poisoning.

Keep growing to eat healthy!  Starts of cool-season vegetables can still be planted. — Sprouts can be grown year-round in your kitchen!

(This article was first published in the Peninsula Gateway on September 29, 2010)