What do Animals Eat? 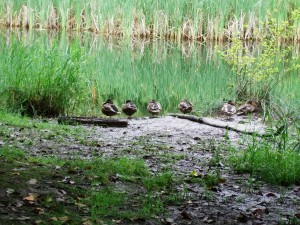 Ducks in a row

Birds: Waterbirds, such as ducks and geese, feed mainly on plants such as pondweed and bulrushes but may also eat fish, crustaceans or mollusks.  Marshbirds or shorebirds, such as cranes and herons, eat more crustaceans, worms, insects and mollusks.  Gamebirds, such as grouse, turkey and doves, rely mostly on plant buds, leaves, fruits and seeds. Corvids, such as crows, ravens & jays are omnivorous, and will eat insects, nestlings, small mammals, berries, fruits, seeds, and carrion. Songbirds also have wide ranging diets—including seeds, berries and insects.  Birds of Prey, such as hawks and owls, eat small rodents, birds and fish. 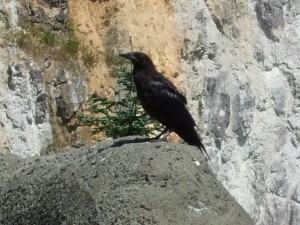 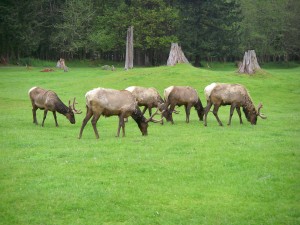 Mammals: Hoofed Browsers feed almost exclusively on plants; Deer and elk mostly on the tender shoots of trees and shrubs; Bison and antelope mostly on grass and herbs.  Small Rodents, such as rats, mice, and squirrels feed mainly on seeds and nuts.  Moles, shrews and bats feed almost entirely on insects or worms.  Larger rodents, such as beaver, mountain beaver and porcupine, as well as rabbits and hares feed almost exclusively on leaves, twigs or bark.  Skunks are mostly insectivorous but will eat other small animals and berries.  Opossums, raccoons and bears are omnivorous.  Carnivores include: weasels, badgers, foxes, coyotes, wolves, lynx, bobcat and mountain lions.

Insects and other invertebrates:  Many people may not be anxious to invite these “creepy crawlies” into their garden.  But as you can see from the above list, many animals depend on invertebrates for food.  They are an important part of the food web.  Broad use of pesticides can severely impact the availability of these important food sources and disrupt the balance of predator to prey.  Invertebrates may eat plants, nectar, decaying matter, or other invertebrates.