I recently went to a workshop on identifying amphibians and their egg-masses.  It was put on by the Stream Team of Thurston County and was taught at the LOTT Wet Center by Marc Hayes, a Senior Research Scientist and herpetologist from the Washington State Department of Fish & Wildlife. They were training volunteers to help survey the populations of amphibians in several urban wetlands in and around Olympia. 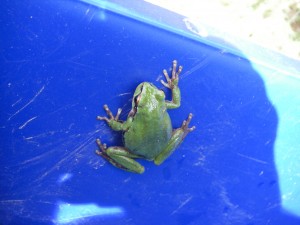 . Pacific Chorus Frogs can be a different colors, including green, tan, reddish, gray, brown, cream, and black, even blue! They start their chirping when temperatures reach about 40° F.

I am fortunate to have good amphibian habitat on my property. I have an “ephemeral” pond that dries up in the summer.   Pacific Tree Frogs seem to lay their eggs as long as water is there.  Dr. Hayes said they may breed for over 2 months, whereas most other species only breed for a week or two. We love listening to their chorus during evenings in spring—temperatures have to be above 40°F before they start their chorus— some say that if you count the number of ribbits in 14 seconds and add the result to 40, you will get the approximate outside temperature.

I provided tadpoles every year for my son’s classes when he was in elementary school.   A couple years ago, I went hunting for frog eggs in the wetland at the back of my property and brought back a huge gelatinous mass. I was surprised and delighted to discover Northwestern Salamander “sallywogs” had hatched out. 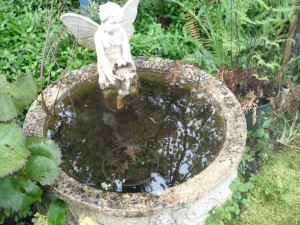 My “scummy” fountain is always full of life!

Whenever I collect amphibian eggs or tadpoles, I always make sure to keep plenty of the pond water and some grass, too.  Keeping a balanced ecosystem gives the tadpoles a better chance of survival. Recently, I spoke with someone who said that they had bad luck with raising tadpoles—it sounded like they tried to keep the water too clean. Tadpoles are largely vegetarian and will eat algae and the grass in the tank. You can supplement by feeding them fish food flakes, too.   Sallywogs eat insects and other invertebrates, but they will eat tadpoles and cannibalize other sallywogs, too.  Adult frogs eat mostly insects. I usually release them in my outside fountain before they completely metamorphose so they can find their own prey. Some people are critical of the algae-green-tinged water in my fountain.  I clean it out later in the summer, but I usually find one remaining salamander still living there! 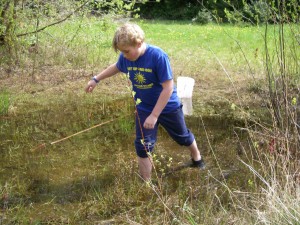 Whenever I would kick my son & his friends outside away from the video games they would usually end up in the pond hunting frogs!

Amphibians have become one of the indicator species of a healthy ecosystem. They are sensitive to pollution and to invasive diseases, such as the Chytrid fungus. You can help out by creating your own frog pond. It is not hard; you just have to be willing to accept having some algal growth. You can dig a pond in the ground, but you may need a pond liner if the water drains away too quickly. Or you can have an above ground water feature, pool or fountain. An important step is introducing natural pond flora & fauna to your pond by getting some pond detritus from a friend or neighbor along with the frog eggs or tadpoles. Dr. Hayes adds a feeder goldfish to each of his pools to control mosquitoes.

It is fun and educational to see what else appears. One of the most fascinating insects is the Caddis Fly larva that makes a cocoon of bits of debris. If you have a microscope, you can see and study the tiny pond critters, too.

In this day and age, it is hard to get the kids outside away from video games and TV, but whenever my son’s friends come over and I kick them outside, they end up knee deep in the pond searching for frogs!

(This article was first published in the Peninsula Gateway on February 13, 2013)