Efficient Irrigation, Water in the Landscape; No blue, no green

The most common reason for failure in gardens and landscapes is inadequate irrigation (or conversely overwatering).  There are many options for irrigation systems from low tech to high tech; from cheap to expensive; and from most wasteful to most efficient.  But, however you plan your garden, plants need water!  Even native plants and drought-tolerant plants need supplemental irrigation the first few seasons until they are well established. 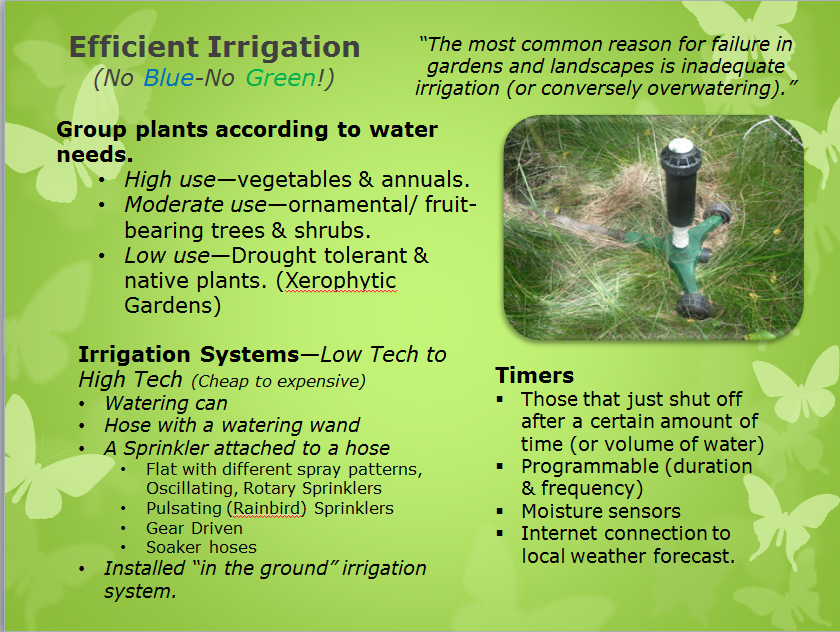 The method or system you choose to employ or install to keep plants alive and healthy will depend on your wallet, your time, and your commitment to water conservation.

The simplest, but most time-consuming and back-breaking method is carrying old-fashioned watering cans or buckets to each seedling, sapling, transplant, or container plant.  Although it may not be a preferred method by many, it is a viable option for those who cannot, or do not want to invest in a more expensive system, especially when irrigation is only needed temporarily during the establishment phase of new landscapes.  Sometimes trucks or wagons can be adapted with water tanks to bring water to where it is needed.

If you can reach plants with a hose, hand-watering becomes easier.  I prefer using a watering wand with just a breaker at the end which allows a maximum volume of water with a gentle shower (not those fancy nozzles with variable spray patterns!).  With a wand, you can also often avoid getting water on flowers and leaves, applying water directly to the soil where it is needed.  Not only is this irrigation method soothing and pleasurable, it allows a person to take the time to inspect and enjoy each plant and to vary the amount of water according to each one’s needs.

A sprinkler attached to a hose is the next low tech option.  Several different styles are available.  The simplest type force water through holes in the top and are available in different spray patterns.  Oscillating sprinklers water larger rectangular areas by forcing water through holes in an arm creating a fan-shaped curtain; which then oscillates from nearly horizontal on one side, to vertical, to nearly horizontal on the other side, depending on the adjustment.  Rotary sprinklers similarly use the pressure of the water to spray a circular pattern.  Some decorative sprinklers add a bit of whimsy to the landscape.  All of these sprinklers can easily be moved to where they are needed.  Travelling sprinklers that move on their own are also available for lawns.

Pulsating sprinklers or “Rainbirds” can apply a large volume of water very quickly and their spray pattern is easily adjusted.  Although they are often sold on spikes, they are best mounted on a wide base, because as the soil becomes soft and moist, the force of the pulsating action causes them to tip over.   Newer gear-driven sprinkler heads work similarly without the jarring pulsating action.

Timers may be purchased which vary from the simplest, which must be started manually but allow you to set a time period after which it will shut off; to more expensive programmable models that allow you to set start and stop times over several days.

The problem with sprinklers, however, is that a lot of water is often wasted, either due to overspray or evaporation loss.  Soaker hoses are another low tech option.  Most are made from rubber, but can be made of different porous materials, they allow water to ooze or slowly drip to the ground where it is needed.

Installing an automatic in-ground irrigation system requires a bigger investment, but is great for people with limited time.  The best systems have moisture sensors so they will not turn on at their appointed time if it has rained or is raining.

(This article was first published in the Peninsula Gateway on June, 15, 2011)