Humans have impacted every part of this planet to a lesser or greater degree.  In the following discussion, I classify different types of human habitats—where people live and work for most of their lives.  For each habitat, I will attempt to suggest ways in which the ecology can be improved for plants, wildlife and the entire web of life.  By doing so, my hope is that we not only preserve many other species on our planet but may also save human civilizations from collapse by preventing future scarcity of the organisms that sustain our species.   Sharing our world with other species not only is necessary but it makes it a more beautiful place to experience life.

An Ancient Native American Proverb often attributed to Chief Sealth states: “Treat the earth well: it was not given to you by your parents; it was loaned to you by your children. We do not inherit the earth from our ancestors; we borrow it from our children.”   Another proverb takes it even further:  “In every deliberation, we must consider the impact on the next seven generations…”  If you think about how much the world has changed in the last 200 years—it is very difficult to imagine what the world will be like 200 years from now! My ancestors, 7 generations ago lived in the 1700’s and early 1800’s. (We all have 27 or 128 ancestors of that generation.) The ones of mine that I know about lived in Colonial America, mostly Pennsylvania, New Jersey, Virginia and North Carolina. A little more than half of my lines immigrated later so were still in Germany and Ireland at that time.

Whether we rent or own, most of us have control over a portion of land.  There is often heated debate over “property rights.”  Some feel that they should be able to do whatever they want on their property.  But the fact is, what people do on their land may have severe impacts on their neighbor’s quality of life and the overall ecology of the area.  That is why there are zoning restrictions and permitting processes.  How much regulation is necessary or good is debatable.

People live and work in a variety of habitats.  Each type varies in the degree of development (or disturbance, depending on your point of view).  I try to focus on how the ecology of each can be improved for plants, wildlife and the web of life within the constraints of justifiable human activities.

Following are “human habitats” classified and arranged from most to least developed and strategies that may help improve the ecology of each.  All include planting with native plant species to some degree.

Industrial— are sites that have been severely impacted by poisons produced as a byproduct of mining, or manufacturing.  Companies still in operation must not allow toxins to leach into the ground, air or water.  Toxic wastes on historical sites must be cleaned up or contained. Some plants and bacteria are able to break down or contain toxic wastes by absorbing and sequestering them into their tissues. 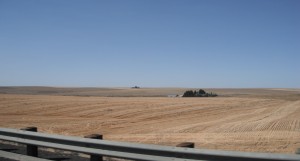 Large Agricultural— are large expanses of monocultural crops where pesticides are routinely applied or “factory farms” where animals are raised in close confinement. Some may disagree that agricultural land should be included in a “most disturbed” category.  It is true that there is much variation in how farms are operated—but stuck in my mind is an image of wheat fields as far as the eye could see which I discovered outside of Grand Coulee.  Breaking up large expanses with “hedgerows” and creating wildlife refuges can improve the ecology surrounding agricultural fields and even reduce the need for pesticides, by allowing wildlife to prey on pest species. The waste that is created by factory farms is increasingly a concern due to the antibiotics and hormones that it may contain in addition to disease organisms. Just figuring out what to do with such a large amount of organic waste is challenging. If we could go back to rotating crops and allowing farm animals access to fields at rest, their waste could fertilize the soil for the next crop and reduce the need for chemical fertilizers. Intensive agricultural production activities need to limit reliance on genetically modified crops, pesticides and chemical fertilizers by incorporating organic farming techniques. 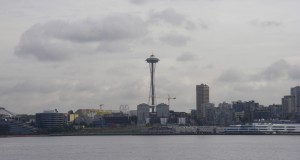 Urban—in the concrete and asphalt jungle of inner cities, life is often limited to weeds in the cracks of pavement, pigeons and rats.  Rooftop gardens can revitalize the ecology of the city.  Planter boxes and street trees make a striking improvement in the aesthetics of the landscape.  By removing impermeable surfaces and planting in open ground, you create “Rain Gardens” that absorb life-sustaining rainwater 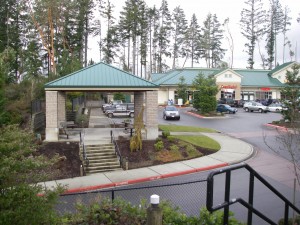 Commercial—In the Gig Harbor area we have two glaring examples of commercial development.  In Gig Harbor North, many trees were preserved and subsequent landscapes were planted mostly with natives.  Whereas in Uptown, all the trees were cut down and, although I commend the pedestrian concept— people are often forced to walk through mostly non-native plantings.  Not only is it not very ecological, the aesthetics of the design doesn’t exhibit a true Pacific Northwestern style.   Better than either of the above strategies, is to redevelop areas instead of abandoning them and encroaching on remaining wild areas. 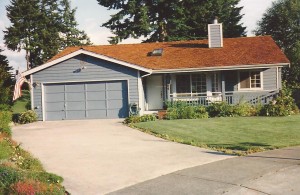 Suburban—many people’s homes are on small lots.  Increasing plant diversity is the best way a homeowner can improve the ecology of their property.  Reduce or eliminate lawn area unless it is used as a play surface.  Try to avoid geometric, single species designs.   Include different heights of native trees, shrubs, groundcovers, and flowers.  Help maintain community parks, green belts and wildlife corridors. 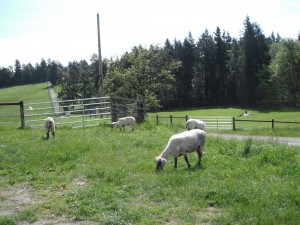 Rural (small acreage)—the historical use of land and your activities will influence how you will want to handle ecological restoration.   Of utmost importance  is controlling invasive species such as Scotch Broom and Himalayan Blackberry.  If you can get native species established, they will care for themselves and you will have less to maintain. 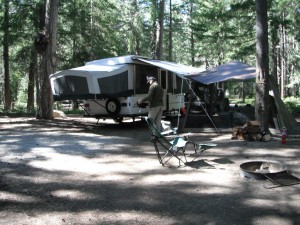 Timberland/Recreational Parkland —can be allowed to mature and grow independently (after replanting) with little management.  Invasive species need to be monitored and controlled. 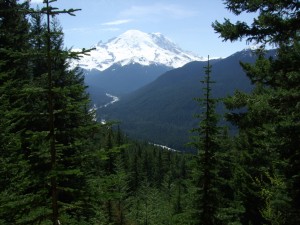 Wilderness—should be left entirely alone except to eradicate nonnative species—or to reintroduce endangered species that have disappeared from regional habitats.

Humans have impacted every part of this planet to a lesser or greater degree.   By improving the ecology of land under your control, you can do your part to “Think globally, act locally!”

(This article was first published in the Peninsula Gateway on March 3 , 2010)