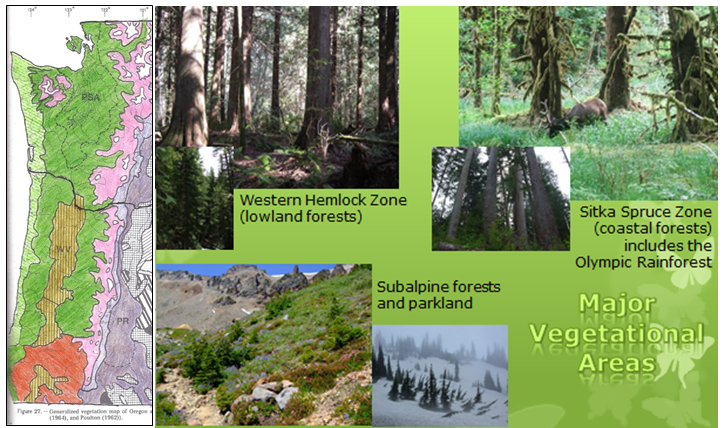 Ecologists separate our region into major vegetational areas– the Puget Sound Area (PSA) is a special region within the “Western Hemlock Zone” (See figure above). The Western Hemlock Zone  lies between the coastal Sitka Spruce Zone  and Subalpine Forests , extending from British Columbia to the northern California coast.  Alpine regions  are at the highest mountain tops. Heading east there is a narrow Mixed Douglas Fir/Grand Fir Region , then a Ponderosa Pine region  before transitioning to drier steppe habitats. In Oregon, the Western Hemlock Zone is split by the drier Willamette, Umpqua & Rogue Valleys  nestled between the Coast Ranges and Siskiyous to the west and the Cascade Mountains to the east. Southwest Oregon is primarily a mixed Conifer & Evergreen Region .

The Western Hemlock Zone is named for its climax species, which is the species that theoretically would come to dominate, barring any disturbance.  Today, Douglas Fir often is dominant due to logging, burning or other disturbances that have occurred over the last 200 years.–but even old-growth stands retain several Douglas Firs because of their longevity (750-1000 years or more!).