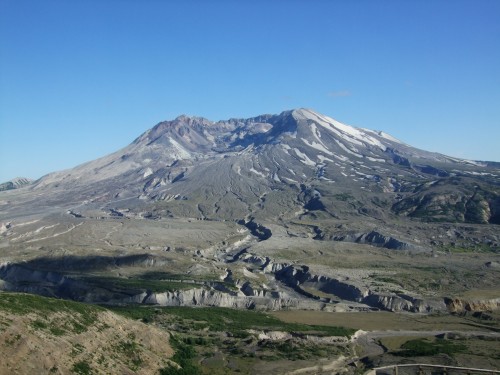 Before we think about planting, it is a good idea to consider what kind of soil we are planting in.

Most of our soils in the Pacific Northwest arise from the interplay between volcanoes & glaciers.  Volcanoes bring magma up from underneath the earth’s surface.  The magma becomes lava as it erupts from a volcano and then cools to become igneous rocks.   Glaciers erode the rocks as they move down the mountain.  These massive rivers of ice grind rocks into smaller and smaller pieces. 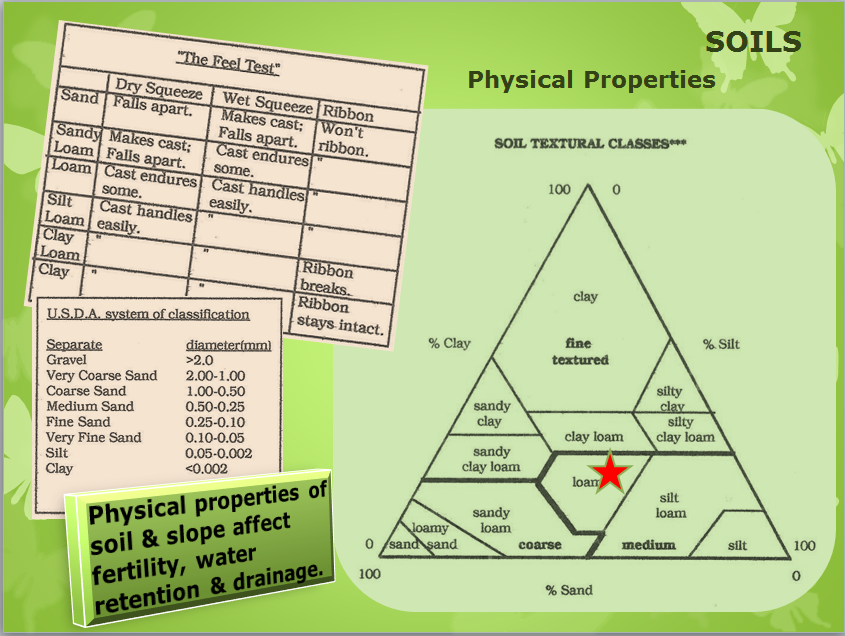 The type of soil you have in your yard will influence your success in growing different plant species.  The figure above shows the USDA classification system for soil particles.  For growing plants, we are mainly interested in the portions that are sand, silt or clay.  Sand, by itself drains quickly and is not able to retain many nutrients.  Silt is intermediate in size between sand and clay.  Clay, by itself, prevents water from draining, but clay particles are good at holding nutrients.

Soils are also classified by the relative percentages of sand, silt and clay as indicated by the Soil Textural Class Triangle. Loam soils, the most ideal, have about 33% sand, a 25% clay and 42% silt.

You can “guesstimate” your soil class by doing a feel test.  For the feel test you take a small amount of soil and squeeze it in your hand.  When you open your hand, you look to see how well the soil holds together.  If it holds together, try to pinch the cast between your forefinger and thumb to a make a flattened ribbon to determine the amount of clay.  If your soil has too much sand or clay, you may want to consider incorporating appropriate constituents to improve its structure.

The pore space between the particles is important for drainage and for gas exchange. Sometimes soils become compacted due to heavy traffic either by foot or by machines.  Rototilling helps to loosen, aerate and mix soil but only to the depth of the rototiller. (It also helps to make removing weeds easier.) Some gardeners shun rototilling and depend upon natural systems to keep their soil pliable.

Composted organic matter is also an important component of soils.  It is any material derived from a living organism.  It adds nutrients, increases nutrient-holding capacity, moisture retention and encourages microbial activity.  A soil high in organic matter usually has a dark, rich color.  Organic matter may be added to soils as green manures (cover crops) that are plowed in prior to planting, or by incorporating animal manures or compost.  Many soil mixes used in horticulture, especially potting mixes, are “soil-less.”  They may contain compost, peat moss, bark, perlite, pumice and/or vermiculite.   A “green” alternative to peat (which is mined out of ancient bogs) is coconut fiber (coir).

Another important factor affecting plant growth that people often overlook is soil pH; pH is the relative acidity or alkalinity.  It affects what nutrients are available for uptake by plants.  Most plants prefer a slightly acid soil (pH 5.5-7.0).  On a scale from 0 to 14, Seven is neutral, the pH of distilled water; less than 7 is acid; greater than 7 is alkaline.)  It is a good idea to test your soil, especially for pH.  Test kits list recommended pH ranges for various crops and will tell you how to calculate the amount of amendments, such as lime, that should be added to your bed.

The microfauna, (bacteria, algae, fungi, insects, and worms) of soil also is important.   Charles Darwin studied and wrote a book about worms, “The formation of vegetable mould, through the action of worms.” The book is about the important role that worms play in decomposing and translocating organic matter in the soil and aerating the soil.  He writes: “I was thus led to conclude that all the vegetable mould over the whole country has passed many times through, and will again pass many times through, the intestinal canals of worms. Hence the term “animal mould” would be in some respects more appropriate than that commonly used of “vegetable mould.”  Many bacteria, fungi and insects are also “decomposers.”  Some bacteria help plants by “fixing” nitrogen; absorbing it from the air and making it available to plants.  Some fungi, such as mycorrhizae assist plants with nutrient and water uptake.  Algae play a role in dissolving minerals.

Epiphytes, plants that grow in trees do not need soil–they are able to absorb water and nutrients directly from the air.  Most plants that we grow, however, are terrestrial plants, plants that grow in soil.  (I have never been very interested in “high-tech” horticulture such as hydroponics—such systems are expensive, involve mixing a concoction of water soluble chemicals and are unnecessary as long as there is space to grow plants naturally in soil).

The plants and trees also affect the fertility of the soil as layers of organic matter are deposited and decomposed by the action of microorganisms.